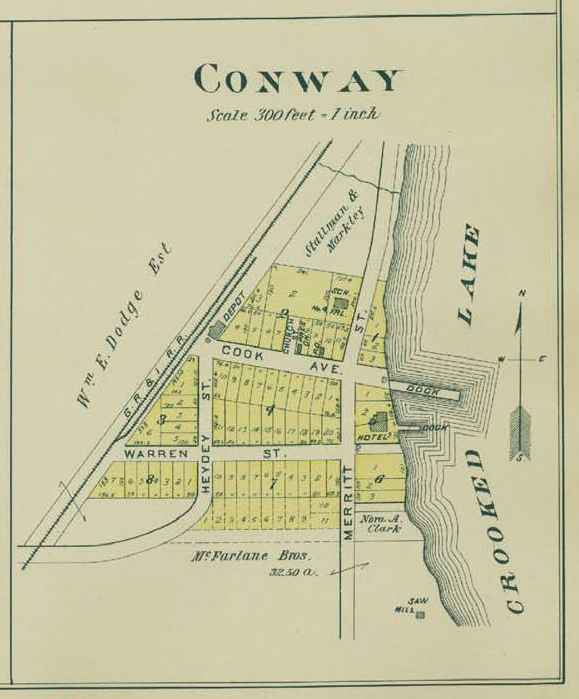 Conway was originally named Crooked Lake.  In 1881 the name was changed to Dodges  Landing. In 1882 the town was renamed Conway. 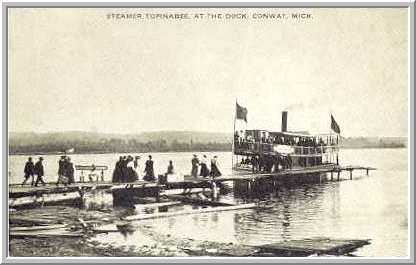 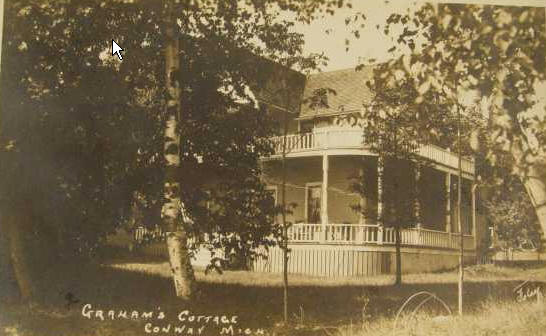 The oldest cottage in Conway was the Bauer cottage built between 1850-60.  It was located on Crooked Lake, just north of the Iduna creek.

Conway has had many businesses. The McFarlane Saw Mill was built in 1870, the mill operated until 1907 when the family took the operation to Oregon.  There have been grocery store operations, ice cream parlors, a bowling alley operation, Hotels, Inns, Gas stations, and a dance hall.

In the late 1880′s John Hastings built the Lake Home Hotel along Graham Rd.  It was located on a terrace above the lake.  Later it was enlarged and renamed the Hastings Heights Hotel and included a nine hole golf course behind the main building. This hotel burnt to the ground.  In 1923 a new building was constructed on it’s foundation and functioned as the Sawkala Boys Camp until 1931.

Two notable operations are still in existence.  The Hiawatha Hotel, and what is now called the Inland House.

The Hiawatha Hotel (later called Hiawatha House)  was built in 1900.  The hotel was created exclusively for summer guests, many early patrons were  from Cincinnati.  The Hiawatha Hotel was originally the Hiawatha Tavern, that name had to be changed during the prohibition, as the word Tavern was not allowed.
The original Inland House was built in 1879,  by Merritt Blackmer, it consisted of five guest rooms.  It was purchased by David Hastings in 1908 and renamed the Conway Inn.  He enlarged it to 3 stories and added an eight stall boathouse.  Flowing Artesian wells flowed so strong that the third story had running water in each room. In 1914 Homer Trask purchased the hotel and named it the Inland House.  In 2002, The Inland House sold rooms as efficiency condominiums, and an addition to The Inland House of 15 one and two bedroom condominiums in a three story structure added in 2003.