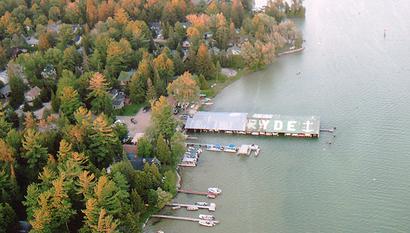 At the turn of the century newspapers around the nation carried ads of steamer trips that followed the path of Native Americans from near Little Traverse Bay (Lake Michigan side of peninsula) through 3 large crisp sparkling blue inland lakes and 3 rivers flowing to the east, reaching the Lake Huron side of the state. Clean, pure air, water and the rich blues and greens of the scenic natural landscape were sought after even at the turn of the century.

Personally owned boats with power were a rarity during that time, so entrepreneurs developed a thriving steamer and hotel industry for those eager to experience that beauty of the Inland Route.

Railroads from even distant points allowed easy access to northern Michigan. A Native American play ending at sunset sponsored by the GR & I Railroad and plentiful shops with Indian crafts and goods added to the experience. Among others, names like Indian River, Ponshewaing, Cheboygan, Topinabee, and Hack Ma Tack still show that Native American influence. In spite of the fact that cottages dot the shores now, a great deal of the things that attracted those early visitors still remain to be experienced.

I would like to personally invite you to come and see for yourself the enchanting Inland Route! Ryde Marine in Ponshewaing on Crooked Lake has existed (under different owners) since 1922. I’m sure that each one of those individuals were looking for, and receiving, more than just earning a living. I can’t document it, but I’m quite sure that boat rentals have been part of the operation since day one. Even if you are unfamiliar with boats, we invite you to be a little adventurous and plan a day or two to see the waterway.

We will spend whatever time you need to be comfortable and confident prior to leaving our facility. If you ask, I will give you some of my favorite spots to enjoy! To leisurely make the entire trip from Crooked Lake to Cheboygan, two days would be best (overnight lodging on the river in Cheboygan), but even one day will provide an unforgettable experience with more than one person telling me it was the best day of their vacation!